My favourite illegal movie site (tvshack) died a while back upon being seized by the US government for piracy.  So I haven’t really been keeping up at all.  This weekend I found out that it didn’t die, it merely changed its name because the government, in their wisdom, seized the domain NAME and not the LINKS which is how the site operates.  (Yay! Now I can catch up on Supernatural and recommence dreaming I’m married to Dean and his hot car)

Anyway, the new tvshack still has everything that the old one did (although now it’s a tad slower and has loads of pop-ups – the fact is it’s free so I can deal with closing the occasional window offering me Tibetan wives and help with my erectile dysfunction).  (I’m a girl).

A few years ago, I went to Spain on holiday, and at the airport on the way there I bought Twilight the book.  I loved it so damn much but it got stolen (along with my passport and ipod) before I could finish it, and the whole thing led to me buying the entire series in one go upon my return home from that gin-soaked-but-twilightless holiday.  And I read all books in a week or something.  I loved it.  I loved all of it.  However, when I finally watched the movie, having loved the books so much, I was so thoroughly disappointed I swore off all things Twilight related, sparkly vampires or not.  I couldn’t take how awful it was.  I still think it was pretty awful and not at all like what I pictured when reading the books. So I refused to finish the movie and didn’t watch the others – my version of throwing a ‘you didn’t do it right I hate you’ tantrum.

But when was that, 2008/9?  Anyway, I realised upon finding tvshack hadn’t died but merely changed it’s name slightly, that I was over my disappointment and ready to give the other Twilight movies a chance.  So I watched them all in order last weekend when I should have been studying.  No, they didn’t get much better but at least I didn’t feel like gouging out my own eyes or anything.  And I will probably actually pay to watch the next one all legal and aboveboard like a good little girl who deserves to have a werewolf boyfriend (who is hot and well hung, maybe).

Unlike Bella who is a sap.

And yes, I really meant all of the above as my little intro to the fact that I am now firmly TEAM JACOB entrenched. 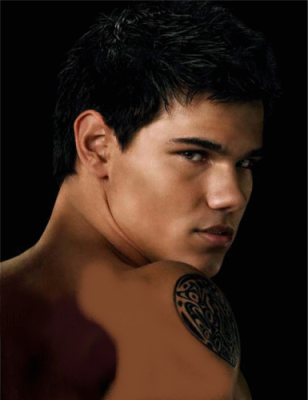 What really made the ultimate decision, though, was not Jacob’s hotness (although I confess there were some drool-worthy moments and I had to disagree with Edward when he made a comment about all the shirtless scenes.  Run around shirtless, I say.  Good doggie) (yes, this makes me a pedo pervert coz he’s like 12).  What actually decided me to be Team Jacob (huzzah!) was Edwards NOT hotness.

He’s a big wet girl’s blouse.  Lord.  Didn’t someone tell him that emo is only hot if you DON’T actually cry all the damn time?  And that genuine emotion is much hotter than ‘I’m so tortured and my emotions are better and more intense than yours coz I’m pretty’.  Jeez, go write in your diary, dude, and talk to me when you get over your damn self in, maybe, another 200 years.  I found myself rolling my eyes whenever he was on the scene.  He also has a squeaky voice and I want to poke his eyes out with chopsticks to give him something to really cry over.

I also want to tell Bella to just fade away coz she’s such a non-entity.

In other news:  I don’t actually have anything to say on Tiramisu, I just like things in threes and that was the first thing with a T that I could think of.  Probably coz I want desert.

Edit:  It seems the government are smart – they’ve siezed the new tvshack too!  Go FEDS!

The owner of this website and the associated forum. Yaoi fan and role play lover for my sins